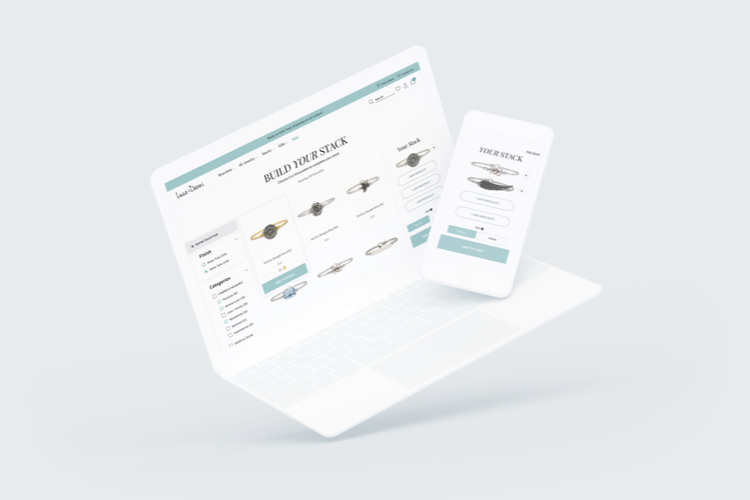 Luca+Danni is an east coast jewelry brand with a growing in store and online presence. Specializing in handcrafted pieces, such as bangle bracelets, necklaces and earrings, they were looking for help with improving their website’s user experience (UX) and eCommerce conversion rate (CVR).

The Result: Created a new feature where users could browse, pick and choose multiple bracelets to purchase for a discounted rate. Within the first month of launch, AOV increased by +13%. 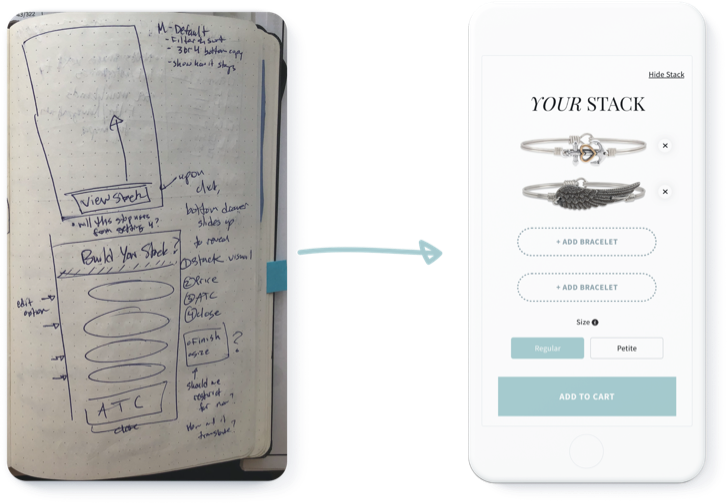 Luca+Danni was a "small retainer client," meaning there were only a handful of hours dedicated to design per month. Initial meetings with the client were important to not only understand the business goals, but to gather insights on (1) their product catalog, (2) their fulfillment process, (3) current user shopping behavior, and (4) marketing strategy. By better understanding these core concepts of their business, I was able to start a list of feature and user requirements.

*Created with considerations to project timeline and budget.

Conduct a competitive analysis to identify advantages and disadvantages within a customizer feature.

Sketch wireframes and user flows to help brainstorm ideas and communicate designs to the internal team and client.

Goals for the competitive analysis were:
(1) Know the strengths and weaknesses of the competition
(2) Identify any advantages and disadvantages of the feature
(3) Have evidence to back up any design decisions
(4) To help solve and/or avoid possible usability issues.

From Sketches to Wireframes

Using the findings from the initial client meetings and competitive analysis, I started to sketch out possible layout designs of the necessary features. Not worrying too much about the final visual design at this point in the process, I focused my efforts on composition, usability, and user flow of the “Build Your Stack" feature. Wireframes were later done in mid to high fidelity for the sake of saving time and effort.

One key element that was iterated on before launch was the idea of educating customers to “Build Your Stack.” Strategies to inform and incentivize users included (1) a homepage section promoting the new feature, (2) primary location in the header navigation, (3) notification within the promo bar, and (4) an email campaign.

Partnering with Luca+Danni’s marketing team, we chose to create a landing page that generated a unique URL to help drive traffic to “Build Your Stack.” With new users experiencing Luca+Danni's brand for the first time with this feature, I explored a few designs to help incentivize user interaction. Each option had their pros and cons, but eventually agreed that showing lifestyle images paired with instructional information was the best option.

Helping users as they shop

It was very important to have areas on screen where information was readily available and/or accessible. I added a few UX and UI elements within the design to help inform and navigate users through this new feature/experience. For example, descriptive copy were either shown on page load or could be accessed through tapping or clicking an info icon. Additionally, a system requirement was implemented where any category or bracelet selections would automatically be saved if a user would happen to exit “Build Your Stack” for any reason. This was introduced to alleviate any user frustrations on lost progress. A list of more helpful UX/UI elements can be found below.

Landing page design incorporated lifestyle imagery of the final product paired with helpful information on what to expect.

A dynamic CTA where the number of products appeared within the button as a user selected categories. This pre-filter experience helped users know how many products are expected to see on the next screen.

"View stack” widget on mobile informed users on how many bracelets were in their stack at any time. This widget also allowed for more screen availability for the product grid/user browsing.

By the end of the project, I successfully conceptualized and designed a new feature that met our business, user, and system requirements. Within the allocated timeline and budget, I conducted a competitive analysis with indirect and direct competitors, sketched wireframes and user flows, and designed mid to high fidelity mockups for a functioning prototype using Sketch and InVision. As a result, within the first month of launch, AOV increased by +13% for Luca+Danni. 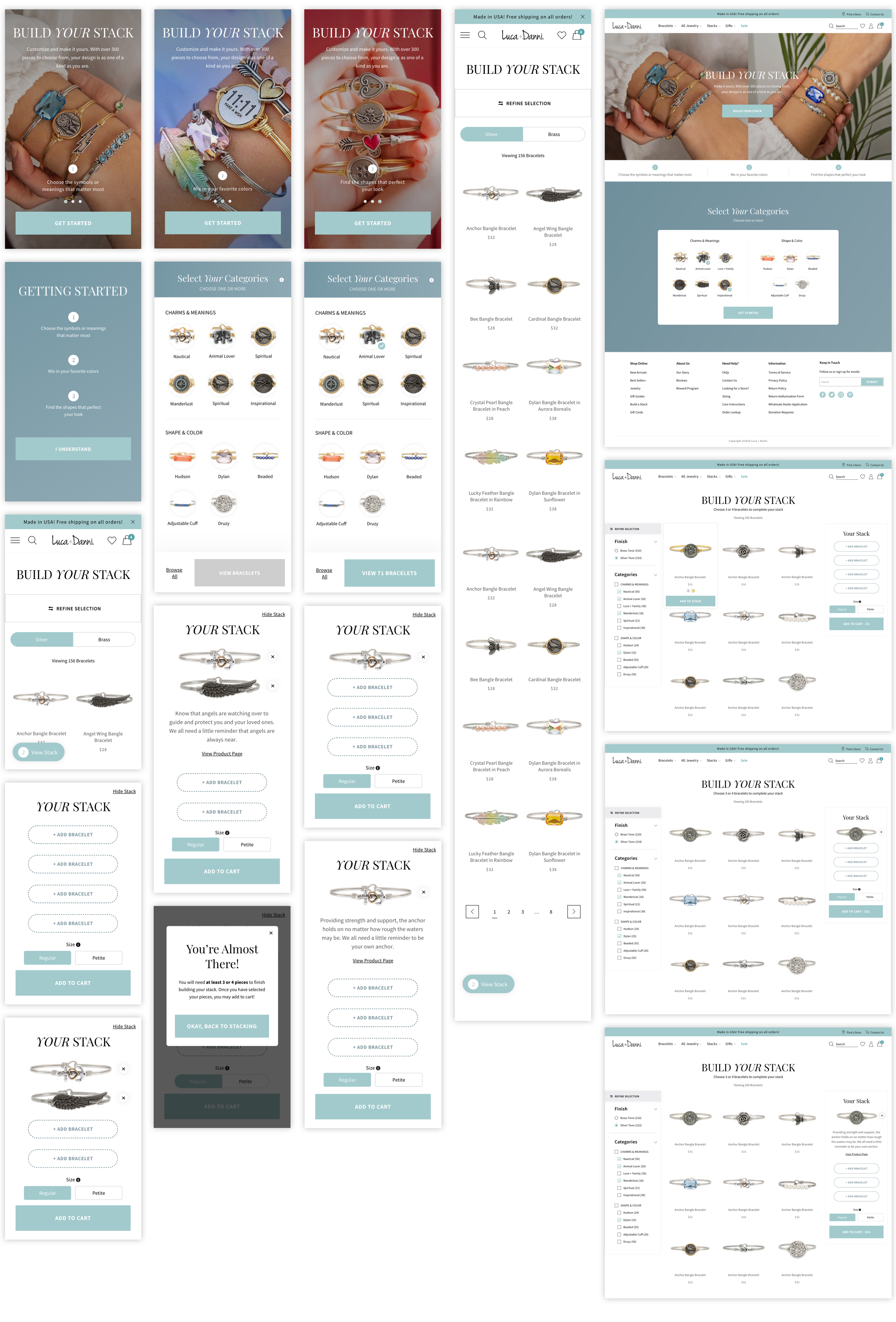 THE NEED FOR FLEXIBILITY

Not all projects have the luxury of a large budget or extra time for UX discovery. Luca+Danni was the perfect example of needing to adapt and rationalize which research method was necessary to move forward with design. Yes, creating user personas and journey maps would have assisted me in making a more tailored experience, but the competitive analysis was more than enough to complete a MVP of this new feature.

Luca+Danni’s "Build a Stack" was one of my first design projects where I had to ideate and design a new feature from end-to-end. Due to a limited budget and short timeline, not all of the styles and functionality made it to the final product. If done again, I would focus on an MVP and carve some time and budget in the later months for follow up user testing. It may not seem worthwhile to the client upfront, but I believe in doing so, we would find more opportunities for increasing AOV and CVR.